Sanders Has Weak Record of Passing Bills Through Congress

Over the course of his career, one Vermont senator has successfully steered more than 10% of sponsored bills into law, totaling 80 pieces of legislation, the greatest record of success among all sitting senators.

Was it Bernie Sanders?

Not even close. It was the state’s senior senator, Patrick J. Leahy.

In fact, Bernie Sanders’s record is starkly opposite. Over 15 Congressional sessions, first as a member of the House and then in the Senate, Sanders has had only three bills directly become law –– just 0.7% of the 421 bills he has sponsored during his legislative tenure. Two of these laws renamed Vermont post offices. This is the second lowest ratio for any current senator who has served across 10 or more sessions. 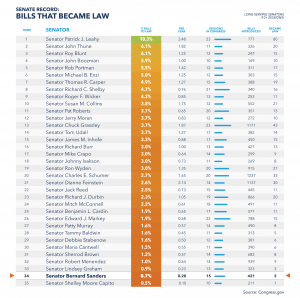 Sanders’s lack of success isn’t just in enacting laws; he has struggled through all the stages of shepherding legislation. Before introduced legislation can become law, it must make it through committee, receive a floor vote, pass both chambers of Congress, and be signed by the president.

Throughout their careers, sitting senators have successfully passed their sponsored legislation through at least one chamber nearly 14% of the time — Sanders’s average is just 1.9%. That’s the lowest for any current senator who has served in at least 10 sessions, and third lowest overall.

By contrast, as mayor of New York City, Mike Bloomberg worked with Democrats and Republicans in the City Council and at the state level to create thousands of jobs, support small businesses, raise the life expectancy of New Yorkers, and combat climate change.